Buddha to the Max 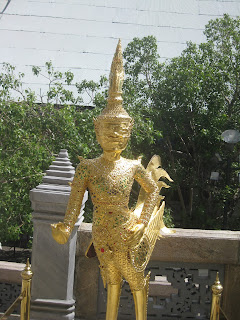 The King is not in residence in Bangkok now. He is out of the hospital and at the palace in the south where they "have trees." That made no sense until we visited the Royal Palace. It is a huge area of  concrete sidewalks and glittering temples and hardly a single tree anywhere for blocks. And there is a dress code: covered shoulders and neck, long pants.

So of course there is security who look at our pants and shoulders and cleavage but never checked bags for weapons! I could be packing a fully automatic anything but if my knees are covered it is OK. The concern is more for reverence than for security.

Each king has added some building to the grounds so it was fun to see how royal tastes change, here a European influence, there a splash of China or Japan. 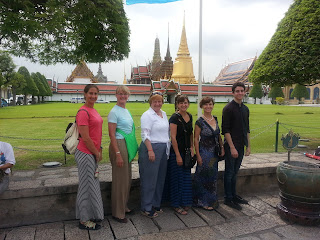 The Emerald Buddha was originally discovered covered in cement and assumed to be simply be another Buddha, then as the monk cleaned it he knocked a chip off the nose and saw it was green! He assumed green was emerald so he named it then. The Buddha is actually jade, but the name stuck. It is small and perched very high up surrounded by masses of gold. 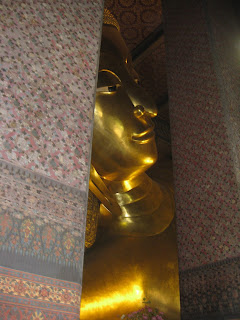 Which did not at all prepare us for the Reclining Buddha. It was the end of the day, and we were about Buddha-Ed-out but gasped as we came into the temple. It is 50 feet high by 143 feet long.

There are 108 bronze bowls for offerings, but you cannot just drop in a $20. You need to change it for tiny little coins so you can drop in one per bowl. The effect is a tinkling like rainfall that goes on constantly.

Robin
Retirement is not sitting still - it is only doing what you love! I divide my time between Nana-dom for 5 Grandblessings, pastoral work St Mark's Episcopal, and writing stuff I hope gets published.